Preschool starts have been wondrous things for each of my children.  When Mr. Cynic was infant to toddler, etc, we underwent many changes in childcare from his going briefly to a box one to a couple of wonderful in home providers to my providing it for others, etc. until I had his brother when he was just shy of 3.5 years old.

I sent him to preschool when he was 4 years old with a lipstick kiss to keep under his shirt, so he would know I was still with him.  He was never a big fan of changes, and I think going to preschool in a high school was very intimidating for him.  Once he adjusted, he made plenty of friends and we had loads of playdates afterschool with a couple of families who had younger baby siblings, too.  It was an Integrated Preschool that provided services to children with special needs while exposing 'typical' students to all kinds of people.

I was never able to send Captain Comic to daycare of any kind for long before they said they couldn't handle him. He went to variations of Integrated Preschools from the time he was 2.9 years old until he entered Kindergarten, with an extra year of preschool.  For the longest time, they had to pry him off of me kicking and screaming, and he clutched two Godzilla toys for comfort, one in each hand throughout the day.  I heard his wails all the way down the halls of each school he attended.  First was the Early Intervention Program in Concord, MA. Second was the Integrated Preschool in the town we shared a public school system with, which was also the preschool Mr. Cynic attended. And the third was a new Integrated Preschool that opened in our little town's only public school - the elementary where his brother was.  Eventually he found an activity, usually puzzles or trains that interested him slightly more than clinging and screaming to me.

Toots has been so full of excited anticipation to start preschool since the boys went back to school in September.  She finally aged into a 2.5 year old two day a week program at a local church.  Yesterday was her first day. 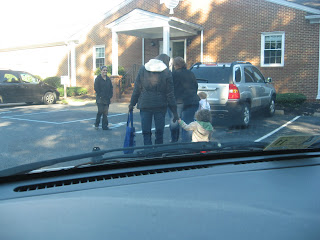 I barely even got a kiss from her as the teachers unloaded the students from their carseats. She was gung-ho and full of smiles.
Grandma  arrived early for pick up and was able to watch the class on the playground for a while before Toots noticed her.  She was so busy with all the toys, equipment and her new friends that she was the last to be corralled into line to leave.

My girl's got some serious spunk and independence.  I've got no worries about how she'll adjust to new circumstances, likely for the rest of her life.  However, once again I will say, I'm in trouble once she's a teen, aren't I?
Posted by cath c at 7:56 AM