Yesterday was the first day of Mr. Cynic's Junior year and Captain Comic in seventh grade.

Mr. Cynic has been riding the bus to high school for the past couple of years, though we live .4 mile from the school. That's closer than I lived to my high school, to which I walked - up hill both ways in the snow. Seriously, I did. It was hilly where I lived growing up in Connecticut. Not here though, and only the occasional appearance of snow.

But back to yesterday, Mr. Cynic and the first day of school. He had the same bus driver for his first two years of high school. She could probably drive her route with her eyes closed. She retired and there was a new bus driver, who drove rather like a lab mouse introduced to a new maze. She had no idea where she was going in the morning. And again in the afternoon. At every intersection she turned the wrong way, according to Mr. Cynic. When his bus was significantly late on the way home, I received a text message: going to be late. bus driver doesn't know what she's doing.


When he finally arrived home, he declared he was never taking the bus again. I smiled. The boy who eschews exercise will be getting some. Every day.

Captain Comic's bus involved less drama but more nerves on my part. He has been riding the SPED bus since we moved here five years ago. He stands at the end of the driveway in full sight of his peers at the corner bus stop to get on a different bus. Last Halloween, I found out that they all knew him, but he didn't really know them. As we walked around the neighborhood, the common cry was "I see him at the bus stop." Last spring, his IEP team and I decided it was time he ride with his neurotypical peers. And when I had an IEP team meeting last week, they all told me, "Mom, you cannot walk him to the bus stop. You cannot ask his friends if it's okay for him to sit with them. He needs to do this himself. He's thirteen."

And while my instincts know this is true for any other kid, I still want to protect him, manage his interactions. So I stood at the window with the camera and watched him. He did alright. 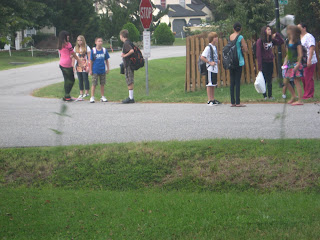 Which one is Captain Comic? Look at the socks.
I checked in via email with his case manager and he had a great first day, even with a homeroom teacher change.
Mr. Cynic is excited to have friends in most of his classes, and is excited to be taking Music Theory with most of his band mates. Keep in mind, they have not rehearsed all together once as of yet, so band mates is still a relatively loose term.
In the meantime, Grandma took Toots with her to her morning pool exercises, and after three weeks without even cracking the manuscript with all the mayhem here, I had an excellent edit session at the local library. I dove into the creative river, doused myself and completely rewrote two chapters really well! The session exceeded my expectations, especially since I felt so lost as I opened the document.
Honey, post-surgery, went back to work yesterday, even though I felt it was too early, but I can't keep him from work. It's his thing. It's hard to see that he loves it sometimes, but deep down, I think this is his creative drive, even when used for others' purposes and under crushing deadlines.
So we have returned to the usual mayhem, and having a routine for it that's a little stiffer than summertime benefits us all, especially after this area has been hit by Mother Nature with smoke from the great Dismal Swamp fires for weeks now, and an earthquake and hurricane last week. The ten to fifteen inches of rain that came with Irene did not douse the swamp fires. Yesterday afternoon, we had a good bit of buckets full rain while Captain Comic was walking Lucy, and with them came Tornado Warnings. And still there is smoke in the air. But we go on, relatively unscathed, unlike many of my friends and family all over the East Coast and inland. Some are still waiting for power after the Hurricane while others in Texas droughts and fire fields, are now without well water.
I feel very blessed that we are back to our normal. Almost - Toots starts preschool next week.